I was recently informed that my old laptop, a HP Pavilion ze4111s, (now being used by my girlfriend) that “it doesn't charge”, which then changed to “it sometimes does, and other times it doesn't”.

I decided to investigate and began wiggling the AC adaptor at the back in the DC jack socket, which appeared to become lose.

My next idea was to take the laptop apart to take a closer look at the DC jack to see where the problem lay.

The first thing I did was to find the service and maintenance manual on the manufacturers website. I managed to locate the Service and Maintenance manual for the HP Pavilion 4100 series in PDF form, this document can be used for many other laptops as they are all built in a very similar way.

To make sure I knew which screws were for what and where, I took a few empty egg boxes, and labelled them as I put the screws in. This will make it easier to locate the right screws when I reassemble the laptop.

After spending some time to get to the motherboard and safely remove it, low and behold the connector had come away from the motherboard, but was sometimes still touching hence why sometimes it worked and other times it did not.

I also discovered that the housing had cracked, and with a little wiggle the top came off, and I could now see the exact problem. 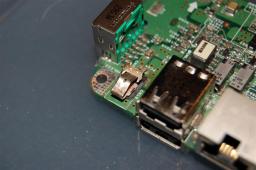 My next step was to work out what to do next with this laptop. This laptop is quite old, and is most definitely outside its warranty period. However I knew what the problem was and had a few ideas on how to fix it.

I decided to contact HP for their suggestions, and while I waited I searched eBay for a supplier of parts for the ze4111s, I located a company who had some parts. I contacted them about getting a replacement motherboard for the laptop, and they suggested that the replacement would be £60. To me that is excessive, probably about 1/3 of the total value of the laptop, it’s not worth it.

I finally got hold of someone at HP, who suggested I contact a service centre, who I found out, charge an absolute fortune! I explained to them that it would not be worth my while and besides I know what the problem is. 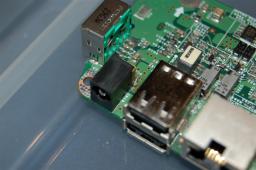 Upon further examining the motherboard, I discovered that the jack could be safely removed from the motherboard providing I could unsolder it from the underneath where it connects to the motherboard in three places. Not a problem, I’d just require a replacement jack.

I went on to explain this to the HP contact, who provided me with the following details:

power jack then you have to replace the motherboard. However, for your

models can be replaced. So, please visit the following Web site to to

know more information about the power jack on the Notebook:

NOTE: The URLs above will take you to a non HP Web site. HP does

not control and is not responsible for information outside

of the HP Web site.

Once you visit the We site, contact support of the web site and check

for the availability of the power jack for your model.

This was most helpful, I discovered that clearly it can be done, and there are replacements out there!

I also found this thread, and figured that if this guy could do it, I could do it too.

I found that the sites above were charging a fortune for the replacement jack, so I checked all my usual suppliers for components including Maplin, no such luck.

Then, a brainwave, I could cross reference google with eBay and see if anyone had mentioned a jack for a ze4111s recently. So that’s what I did, and soon discovered the seller “laptop18000“, and their shop “GOOD DEALS IN” based in the USA, but sells DC jacks for laptops for very cheap compared to the previous offers. 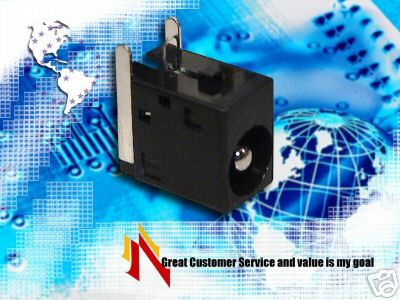 “Sounds good to me!”

From here its simply a case of de-soldering the old connector from the motherboard, soldering the new connector, then putting the laptop back together. Problem solved!

Meanwhile, the laptop remains in pieces… 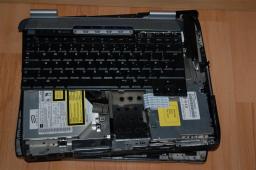 In conclusion, don’t throw your laptop away, don’t pay excessive amounts getting someone autherised by HP to fix it, don’t pay more than you have to. DO IT YOURSELF!