Just before Christmas, I decided I was going to get an MP3 player for my girlfriend as she wanted a new mp3-player, as her 40gb one was too much and now old, so she was looking for something with around 4gb or 8gb of storage space.
A friend suggested there were tuns of 4GB MP4 Players on ebay, I questioned him and said, I wonder why they are going so cheap, his reply was thats because there are so many. I figured something wasn't quite right, but as the sellers had over 98.99% positive feedback I figured it seemed like a half decent deal. 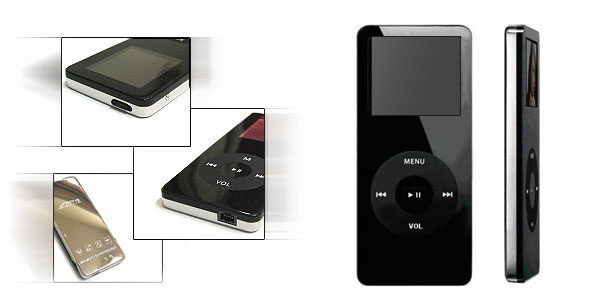 The MP4 Players I was looking at were comparable to the Apple iPod nano in appearance, I knew they wouldn’t function in the same way, but these offered way more features and were far cheaper than a nano.

So I spent some time bidding on quite a few of these mp4 players, making sure I wasn’t paying over the odds to get one, as there were simply loads on ebay, it was silly to try and outbid other people. They were going for between £28 and £40, I was going for £34 max.

Note: At this point I have not left feedback for my items, as I know I had not fully tested them.

Christmas comes and goes, all is well. My girlfriend asks me to put some music on her mp4 player, which we do by spending a long time looking through my 80gb external hard drive. We collect 4gb of music she wants to listen to and place it onto the device.

She goes home. The next thing I know and she’s on the phone to me complaining about how she can’t play some of her music and it seems corrupt in some way. She brings it around the following day and I check it out, and try new music on the device.

After some playing around I realise that anything over about 1gb of media and the data is corrupt. I send her away and begin my research.

I took upon me the impossible challenge of trying to work out who the manufacturer of the devices are. I checked all the firmware on the device, nothing, so I check the software that comes with it.

I run the MP3 Player Upgrade Tool (“C:\Program Files\MP3 Player Utilities 4.00\RDiskUpdate\RdiskUpdate.exe”), and low and behold the device name and manufacturer is there.

With these details I soon found a page in the Wikipedia entitled S1 MP3 Player. The Mp3 player displayed here was nothing like the mp4 player I had, I figured they just forgot to update the details in the software I have.

Also I managed to locate the Wilson Co. Ltd. Website, which appears to be down or no longer exists as it did, however through the powers of the internet I am able to use the web archive and view a previous version of the Wilson Co. Ltd. website. To no major benefit, the website contains limited details, and clearly the products are no longer supported.

I go back to the wikipedia page, and find the S1mp3.org forum. A quick search on there and I soon find a thread where people are experiencing the same issues as me.

So just by chance I decide to do a bit of research based on the ebay sellers, to see if I can find where these items came from and what the deal is here.

All the images they use on the ebay auctions are hosted on store724.com which when I visit brings up details about tronfydirect.com.

A quick google search for tronfydirect.com brings up details of ebuyhk.com, i’ve also seen the username ebayhk on ebay quite a few times in the past. A quick search for ebayhk.com very quickly brings up a few references including maskpay.com which is VERY dodgy. However, I will leave that for this time as this goes beyond my concern.

I also searched for tronfy.com, which brings up details of downloads for mp3/mp4 players and an FAQ.

I also did a search for store724.com, and instantly top of the list a bunch of websites are returned with people referring to one of the sellers I purchased my mp4 player from “ugoole”.

I take a look at the Procopy Perth website which appears to detail this very well, however it is .au based.

From there I also find a UK based website entitled “mp3 / mp4 players on ebay beware!” reporting the same details.

From here I discover some useful details, including a guide on how to check the size of your mp4 player and details of how to restore your mp4 players size to the correct capacity, which is as follows:

That is it, exit the program, and your device is set to function correctly. I also found a longer guide here.

Although it seems like i’ve accepted that I’ve been ripped off and solved the problem with the device, I did not stop there.

I contacted the sellers on ebay and threatened to leave negative feedback if they didn’t agree on a deal with me. They eventually refunded me £8 per device, and I have yet to leave them feedback.

Well that’s just about everything, I hope that you find this information is useful.

Also read the The Official Fake 4GB+ MP4 Player Scam On eBay FAQ on ebay, and whatever you do if you DO have one of these items, DO NOT send it back, but DO demand a refund like I did, chances are at least you will get a partial refund.

Note: I have noticed since that e-britain and ugoole have changed their feedback to “private” probably because people were posting links in their feedback. You can still email ugoole and e-britain.