Before Randles was bought out by the Stoneacre Motor Group I was tasked with the development of a new website.

The goal was to focus on mobile first, not a split desktop/mobile site, but a responsive mobile website.

A specification first started to come together in 2012, but was delayed due to other projects.

– Dermot Kelleher, Head of Research and Marketing at Motors.co.uk

By 2013, the demand to “go mobile” was now apparent and the pressure to build a new website was mounting. There was no way we were going to have a separate mobile website either, this had to be responsive.

The goals were simple:

As part of the development I outlined some questions to analyse where we were with the existing website and where we were going with the new website:

The feedback about the existing website was that it it difficult to accommodate expanding business, outdated, too cramped and difficult to add new content and features.

The next thing I did was assess the challenges that the web is now presenting:

The feedback from the analysis combined with the analysis of the current demands from the web meant that we now had a clear vision of what was needed.

This demanded a good Content Management System with the ability to add users as contributors, editors and administrators so they could create blog content such as announcements, manufacturer news, tips, advice, offers, photos, feedback, reviews.

While developing the plan I had looked at a number of Content Management Systems including Concrete5, Drupal, Wordpress, ExpressionEngine, Plone, Magento.

The most obvious choice was WordPress as I’d been using it for about a decade, it’s PHP based (a language I’ve been using even longer), Google loves it and it’s easy for users to manage content.

The next task was to think about how we were going to execute the plan.

We decided to import our existing blog content from an old WordPress archive from 2005-2009 along with our Tumblr blog, bringing our content together to instantly reach out to more people.

Using WordPress’s powerful plugins we were able to connect to social media networks such as Facebook, Twitter, LinkedIn and Tumblr so that when a new post was published it would broadcast to these networks.

The most challenging part of the development was designing and building the Used Car addon to accommodate he used car listing and search in a responsive way.

The most laborious task was to redo the content. The artwork had to be redone to be responsive and the content had to be completely rewritten.

We soft launched in 2014 as the plan was to continually build on the foundations once the new content was done, this included a new design. 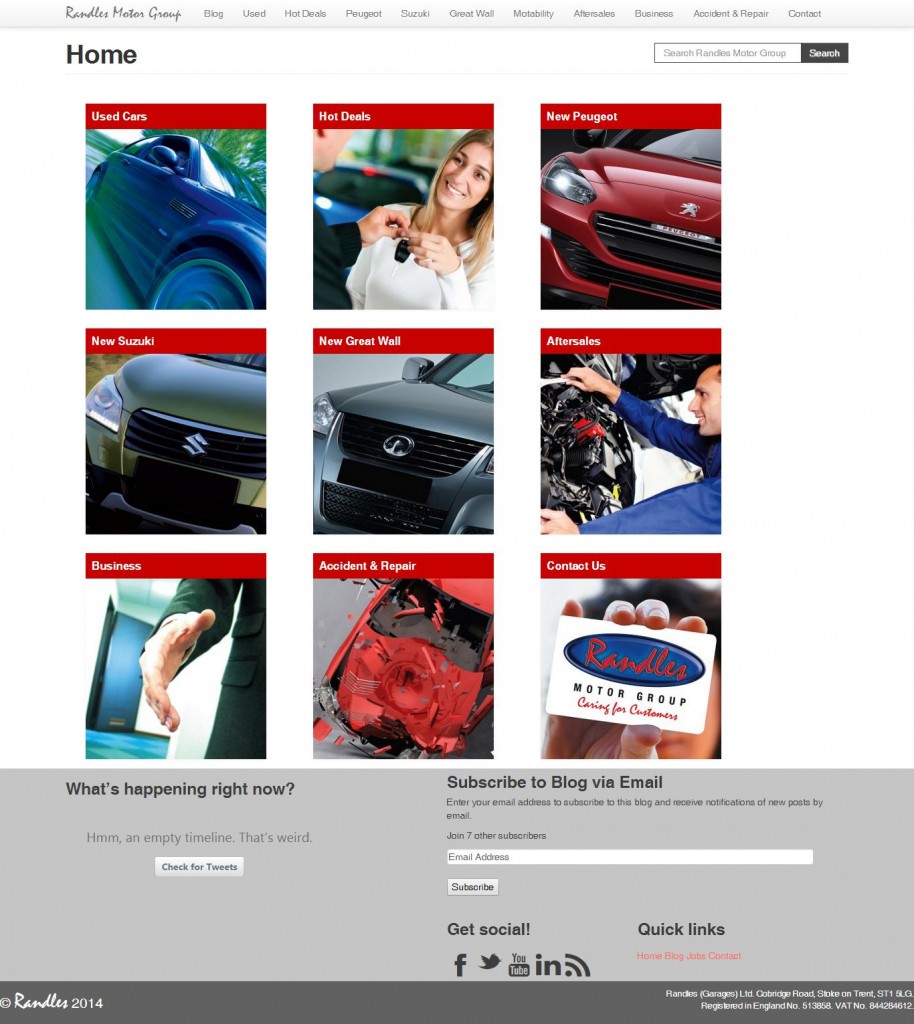 The goal was to launch under the new randles.uk domain making us the first Motor Group to use the new .uk domain names.

The results from doing this were easy to see, the new site meant that we were:

Given the situation, I don’t think I would have done anything differently given the opportunity to do it again single handedly, it was within the scope of the brief. However, given a budget and/or a team to work with, the results may have been very different.

Next time, we’ll look at the Used Car addon.