The best part of last week I spent trying to resolve an issue for a business who was experiencing downtime with their broadband.

The broadband was working fine, nothing had changed, then it went off. 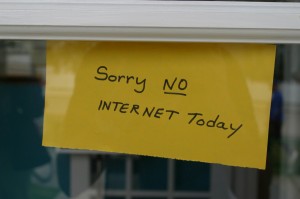 The internet was well over due a holiday...

I checked the line for voice, I switched the filter, I plugged directly into the maintenance socket, I tried a different router, yet nothing would work.

Eclipse is their ISP (Best Business ISP 2008), and so far they have been very good. Very good in the way of taking the complaint and reporting it to BT Wholesale.

And so an appointment was made for a BT engineer to come out and investigate the situation.

He came on-site and investigated the issue. He agreed that the issue was at the exchange and would investigate it further.

The BT engineer spent about an hour at the exchange before giving me a call to let me know of his discovery. He found that a fuse on a card in the exchange had blown, so he had replaced it. Upon replacing it, it blew again.

He then went on to explain that replacing this card is beyond the scope of BT OpenReach and he would have to report it back to BT Wholesale for them to take the issue further.

Meanwhile, I had to provide my client with some kind of backup solution and the only thing I could think of is dialup. So I went ahead and setup dialup on their Windows 2000 server, and shared it using ICS (not recommended).

The downsides to using dialup is that not only does it uses a line but there’s a cost per minute, depending who your call plan is with, which in this case is BT.

The following day the card was replaced. The broadband worked from 1PM but then failed again at around 4PM. I’m guessing the fuse and/or card went again.

By this point, a week has gone by and their connectivity has gone up and down more times a pair of kangaroos in mating season. This was a terrible situation!

So the question is what can you do when your broadband connection fails?

The short term answer is, well, not a lot, unless you’ve planned.

If your broadband fails and you have no redundancy plan in place already, you’re pretty much screwed until your provider resolves the problem.

That is of course unless you know how to quickly setup and route a dialup connection to the network like I did.

So, of course, the connection eventually comes back on, all is well and everyone forgets about it, apart from, of course your network administrator, who’s job it is to ensure it doesn’t happen again.

I remember reading an article about a company that had it’s line accidentally cut by a BT engineer who refused to repair it. After involving both Ofcom and courts, the issue was eventually resolved. However it begs the question, what does this company do now to ensure redundancy?

The popular broadband guide website “thinkbroadband.com” discussed this issue in an article entitled “When broadband fails: Business continuity” offering some suggestions on possible redundancy solutions, yet nothing definitive. The search continued, until now…

After reading an excellent article on the Vigor 2820 Series broadband router the choice was clear.

After checking there was sufficient 3G/HSDPA availability via the Three coverage checker my recommendation was to get a pay as you go USB data modem (3 Pay As You Go Mobile Broadband) combined with the Draytek Vigor 2820Vn Dual Wan ADSL2/2+ Security Router (Wireless LAN & VoIP) for the ultimate redundancy and internet connection continuity.

Sure, all this will set you back between 200 and 300 quid, but it will also provide peace of mind in knowing that come Monday morning, you WILL have an internet connection.

The question you have to ask is:

Can your business afford to be offline?

If the answer is no, it’s time to have a rethink!